1. (1)  Green Bay Packers 14-1– Aaron Rodgers and the Packers got back on track by beating up the division rival Bears.

4. (4) Baltimore Ravens 11-4– Continue to look like the most complete team in the AFC, despite some struggles on the road.

5. (5) Pittsburgh Steelers 11-4- The health of Big Ben could be the difference between a Super Bowl run or early playoff exit.

6. (6) New England Patriots 12-3– Tom Brady is having another sensational season.  This year he is in the background of Aaron Rogers & Drew Brees.

7. (7) Houston Texans 10-5- Arian Foster, a tremendous defense and playing at home could line up the franchises first playoff victory.

8. (11) Detroit Lions 10-5– If they don’t beat themselves with penalties and turnovers they could be the NFC’s most dangerous wild card team.

9. (14) Cincinnati Bengals 9-6- They are a win away from a playoff berth.  Cinderella story in the making?

11. (13)- New York Giants 8-7- Winner takes all on Sunday night football. Eli will look to shine in prime time yet again.

12. (9) Atlanta Falcons 9-6– Hoping this work out so they can travel to New York/Dallas next week.  Pretty sure they have no interest in returning to New Orleans.

13. (10)Denver Broncos 8-7– The Tim Tebow talk has quieted a bit.  One win and a postseason birth with get the talk rolling again.

14. (16) Oakland Raiders 8-7- Overtime victory in Kansas City keeps them in the division race.

18. (18) Seattle Seahawks 7-8- Will look to improves on last years division winning record with a victory in Arizona.

19. (17) Arizona Cardinals 7-8– Despite injuries and overall lack of talent the Cardinals have won 7 games.

20. (22) Philadelphia Eagles 7-8- Will look to finish strong with a victory against the Redskins but its a little late to play up to potential.

23. (21) Chicago Bears 7-8– When you see the Bears without Matt Forte you really realize just how much they miss him.

27. (27) Cleveland Browns 4-11 –They have a lot of work to do in whats been the best division in football this season.

28. (29) Jacksonville Jaguars 4-11- No easy task to close out the season against the suddenly red-hot Colts.

30. (30) Minnesota Vikings 3-12– With Adrian Peterson’s future up in the air its time to consider full-blown rebuilding of the franchise.

31. (32) Indianapolis Colts 2-13– Perhaps the inevitable Andrew Luck question won’t ever have to be answered.

Aaron Rodgers and Clay Matthews brought a Lombardi Trophy back to Titletown.

Kemba Walker and the Huskies took down Butler to win the NCAA Tournament.

Dirk Nowitzki and the Mavericks beat a highly favored Miami Heat in the NBA finals.

After making the playoffs on the final day, the Cardinals beat the Rangers in the World Series in 7 games.

The New Orleans Saints are your 2011 NFC South Champions. The  Saints clinched their division with a win over the Atlanta Falcons 45-16. They are 12-3 and host the Carolina Panthers this week.

Drew Brees has thrown for 5,087 yards and 41 touchdowns this year.

Jimmy Graham has emerged as one of the best Tight Ends in football with 1,213 yards and 10 touchdowns.

Roman Harper leads the Saints defense with 92 tackles and 7.5 sacks.

1.Chicago Bulls (Central Division Champs) – The starting five is loaded with the addition of Richard Hamilton but they need one of the young guys to step on the bench. 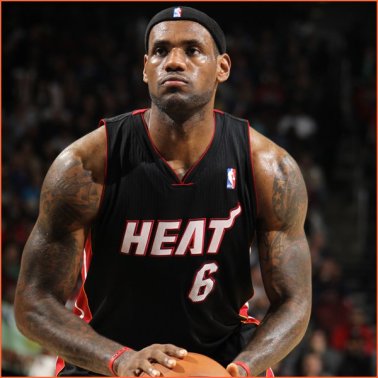 Lebron hopes to get that bad taste out of his mouth from last years finals.

3. New York Knicks (Atlantic Division Champs) – The Knicks added Tyson Chandler and Mike Bibby to an already explosive offense but the lack of depth on the bench may hurt them.

4. Orlando Magic – They have the talent to make the finals, but if they struggle it will be interesting to see if they shop Dwight Howard.

This could be the Magic's last chance at a Finals run before Dwight Howard heads to free agency.

5. Boston Celtics – Could be the “Big Three’s” last run at a championship.

6. Philadelphia 76ers – They will take another step under Doug Collins.

Jrue Holiday is developing into an all star point guard in Philly.

7. Atlanta Hawks – A solid starting five, but can Tracy McGrady replace Jamal Crawford off the bench.

8. Indiana Pacers – They add an all-star like David West to a core of young, talented players.

1. Oklahoma City Thunder (Northwest Division Champ)– Russell Westbrook doesn’t shoot as much as he did in last year’s playoff while Kendrick Perkins provides the depth down low for the Thunder to overtake Dallas and become the Western Conference representative in the NBA Finals. 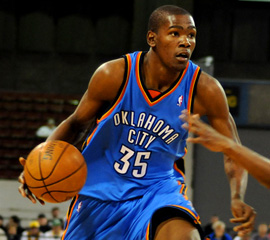 Durant has led the league in scoring the past two seasons.

2. Dallas Mavericks (Southwest Division Champ)- Tyson Chandler is a big loss, but Lamar Odom and his candy fix will soften the blow.

4. Los Angeles Lakers (Pacific Division Champ)- If Kobe get hurts, this team is screwed.  They don’t have any depth.

5. Memphis Grizzles-  With resigning Marc Gasol, Memphis looks to take the next jump after upsetting the Spurs in the playoffs.

6. Los Angeles Clippers- That starting 5 is legit and if the Lakers slip because of a Kobe injury, the Clips could jump up to the Top 4. 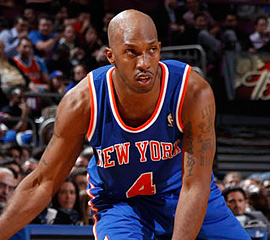 Billups wasn’t even the biggest point guard the Clippers picked up.

7. Portland Trail Blazers– LaMarcus Aldridge is a superstar that no one ever talks about because he plays in Portland.

8.  New Orleans Hornets–  Kaman and Eric Gordon are a nice package for Chris Paul.  Okafor and Landry will provide depth on the front line to sneak them into the playoffs.

Warren’s picks for the hardware

-NBA Finals– Thunder over Heat in 7. Perkins is better than any big the Heat can throw out there.  Westbrook vindicates himself with a great Final after last year’s struggle in the playoffs and wins the Finals MVP.

NBA MVP– Kevin Durant- Durant leads the league in scoring for a third year and wins his first MVP.

Defensive Player of the Year– Dwight Howard- Motivated by an upcoming free agency, Howard dominates and wins his fourth DPOY.

Sixth Man of the Year– Jason Terry- Terry could start on every team, but the system in Dallas works out well.

Most Improved Player– Jrue Holiday-  Homer pick, sure. However, I really feel he’s going to take the next step and become a great player.

Coach of the Year– Monty Williams- Expectations are probably low for the Hornets because of the trade of Chris Paul, not having an owner, and low home crowds, but they are good enough for a surprise playoff berth.

Rookie of the Year-Ricky Rubio, Minnesota- Rubio provides the Wolves with a point guard of the future as the revolving door at point guard for the organization finally ends.

Scotty B’s picks for the hardware

NBA Finals – Thunder over Bulls in 6. Sensational match up at the point guard with Rose and Westbrook, but the Bulls problem will be finding someone to guard Durant.

NBA MVP – Kevin Durant – There is nothing this guy can’t do and now he has a solid team around him.

Defensive Player of the Year – Tyson Chandler – He adds  a defensive presence the Knicks haven’t had since Patrick Ewing.

Sixth Man of the Year – James Harden – A sharp shooter off the bench who will spark the Thunder when teams actually can slow down Durant.

Most Improved Player – John Wall – He will join the elite point guards this year in the Nations capital.

Coach of the Year – Vinny Del Negro – Blake Griffin and Chris Paul will make him look like a pretty good coach.

Rookie of the Year – Kemba Walker – With Gerald Wallace now in Portland, Kemba will be the man in Charlotte.

It’s time for the “Sports with Balls” weekly NFL picks for year number three! Our picks made available exclusively via the blog on a weekly basis.

Every week we’ll be picking one 1 p.m. and one 4 p.m. Sunday game, as well as any prime time or holiday games on the schedule.

Mike O is on a roll. Check out his twitter.

Warren is a college student who works only part-time. Take a look inside Warren’s world via twitter.

Check back next week for updated standings and Week 17 picks.

-Every time I see Blaine Gabbert, I see a guy who can’t play quarterback.

-Roddy White is a beast in case you were wondering.

– The Bucs are 4-10 for  good reason. They looked awful at home on national television.

-With a win against the Eagles, the Cowboys can wrap up a mediocre division.

-Reggie Bush is quietly having a great season as the “featured back.”

-For the Dolphins to go on the road to the cold, wintry mix of Buffalo and win, that shows a lot of character.

-You know your quarterback is bad if Tarvais Jackson outplayed him.

-Titans are still alive for a wildcard, but one must wonder if Jake Locker will get a start before the year is out.

-Colts are still a game up for the Suck for Luck sweepstakes.

-This game makes you wonder how the Chiefs’ season would have played out if Kyle Orton started over Tyler Palko.

-Arrowhead is a tough place to play, I wouldn’t be worried if I were a Packers fan yet.  Those offensive line injuries could be an issue though.

-AJ Green is a stud.

-Not sure what the Rams were expecting with Kellen Clemens starting.

-Drew Brees would be the MVP if it weren’t for Aaron Rodgers.

-The Saints had 366 more offensive yards than the Vikings. Ouch.

-I really think the Redskins are a quarterback away from being a playoff caliber team.

-Hakeem Nicks’ drop in the first quarter completely changed momentum in the game.

-Honeymoon with TJ Yates is over for Houston.

-Steve Smith has over 10,000 yards receiving in his career. A few more years with Cam might push him to Hall of Fame status.

-I honestly thought the Lions were done, but what a 98 yard drive to come back.

-Calvin Johnson is a monster.

-The Patriots clinched their 9th AFC East title in 11 years.

-Broncos still control their own destiny for the AFC West title.

-Jason Babin has six sacks in his last two games.  While I have questions about his run defense, he’s a beast rushing the passer.

-LeSean McCoy is one of the few bright spots in an up and down season.

-John Skleton is 5-1 as a starter. Kevin Kolb is no stranger to a QB controversy.

-Glad to see Peyton Hillis finally contribute to my fantasy team.  Could have used that about 7 weeks ago.

– Chargers need some help, but are a team that no one wants to play right now.

-Whenever I see Ray Rice with less than 20 carries, I have to wonder what John Harbaugh is thinking.

-Alex Smith needs to turn those field goals in the red zone to touchdowns if the Niners want to win the Super Bowl.

5. (4) Pittsburgh Steelers 10-4-Went from possibly being the 1 seed with a win to the 5th seed after a tough loss to San Francisco.

6. (7) New England Patriots 11-3– Tom Brady switched it up. Made Aaron Hernandez the main target this week.

7. (6) Houston Texans 10-4- You knew they were in for a tough day when they gave up a touchdown on the Little Giants’ play.

10. (8)Denver Broncos 8-6– Even with the loss, they control their own fate for the AFC West crown.

12. (9) New York Jets 8-6- Despite getting plastered by the Eagles, they are still the second wild card team in the AFC playoff race.

15. (18) San Diego Chargers 7-7- Once again, the Chargers are the team no one wants to play if they make the playoffs.

16. (16) Oakland Raiders 7-7- Darrius Heyward-Bey is finally starting to live up to being the 7th pick in the draft.

20. (28) Kansas City Chiefs 6-8– Makes you wonder what happens if they start Kyle Orton over Tyler Palko.

23. (24) Carolina Panthers 5-9- Cam continues to shine in his rookie season with an impressive win over Houston.

25. (26) Washington Redskins 5-9- Defense shut down the Giants and picked up an upset win in New York.