END_OF_DOCUMENT_TOKEN_TO_BE_REPLACED

Can Andrew McCutchen and the Pirates build off their impressive 2013 and win the Central?

END_OF_DOCUMENT_TOKEN_TO_BE_REPLACED

Joey Votto and the Reds won the Central in 2012 and are the favorites again in 2013.

END_OF_DOCUMENT_TOKEN_TO_BE_REPLACED

Larkin has joined the halls of baseball’s immortals.

The historic halls of baseball’s greats have opened its doors and invited three more men into their fraternity. Barry Larkin, Ron Santo and Tim McCarver head the class of 2012 into Cooperstown. Larkin played 19 seasons for the Reds, he was a 12-time all-star, 3-time gold glover and the 1995 NL MVP.  Santo was a Cub for 15 seasons, making 9 all-star games and winning 5 gold gloves. He was selected by the Veteran’s committee after being snubbed for many years. Tim McCarver is the 2012 recipient of the Ford C Frick Award for baseball broadcasting excellence. McCarver has broadcasted since 1980 for NBC, ABC and currently works for Fox covering Saturday and playoff games with Joe Buck.

END_OF_DOCUMENT_TOKEN_TO_BE_REPLACED

Wood struck out 20 Houston Astros in a game in 1998, it was only his fifth career start.

END_OF_DOCUMENT_TOKEN_TO_BE_REPLACED

Heading into the 8th inning on Tuesday, the Phillies’ offense was terrible.   With one run and eight hits through 16 innings,  the Phillies were staring a losing series in the face.  A two run double by Chase Utley changed all that.  Utley’s double tied it, Michael Martinez’s double won it, and all of a sudden the Phillies tied the series at one.  Then, on a brutally hot get away day, the Phillies’ bats crushed Cubs starter Ryan Dempster, winning 9-1, thus winning the series.  It’s the eight straight series win for the Phillies and improved their record to 61-36.  The Cubs fell to 39-60. (Blame the goat.) The Phillies have a day off on Thursday before starting a ten game home stand beginning with the San Diego Padres. The Cubs also have the day off Thursday and then continue their home stand against a team that’s actually worse than them, the Houston Astros.

The Phillies were down 3-0 before they got their first hit in the 4th on a Jimmy Rollins’ solo home run. Aramis Ramirez got the scoring started for the Cubs when he took Roy Halladay deep in the first inning and followed that with a sac fly in the 3rd. Carlos Pena and his lovely .225 batting average added an RBI single in the third inning as well.  Phillies’ fans held their collective breath in the 5th inning when Phils starter Roy Halladay left the game after one batter because of what would later be diagnosed as heath exhaustion. It was insanely hot during the game and Halladay was seen bending over at the knees more than once. He said after the game that he was dizzy and couldn’t concentrate on the signs.  The great news is Halladay is fine and will make his next start on Sunday vs. the Padres.  Drew Carpenter, who has no business being on a big league roster, replaced Doc and as expected, gave up multiple runs.  Doubles by Barney the dinosaur AKA Darwin Barney (I had to, sorry) and Kosuke Fukdome made it 5-1 before David Herndon replaced Carpenter.  Again as expected, David Herndon proceeded to give up a monster home run to Carlos Pena, who managed to have three hits shockingly.  Besides the Rollins home run, the only other scoring chance for the Phillies came in the sixth inning for Ryan Howard with two on and one out. Howard popped out to short, followed by a Raul Ibanez strikeout to end the threat.  Rodrigo Lopez baffled the Phillies, going into the seventh inning, scattering five hits, striking out three.  While it was just another loss in a long marathon of a season, you couldn’t help but get frustrated by the Phillies’ lack of offense off a guy who has almost as many teams as years in the bigs. (6 years, 5 teams)

It’s safe to say Cliff Lee got off to a rocky start. Double, Home Run, Double in the blink of an eye.  Starlin Castro hit the home run for the Cubs as they took a 2-o lead in the first inning.  After giving up five hits to the first nine Cubs batters, Lee settled in, giving up only three hits from innings 3-6.  He was pulled for a pinch-hitter in the top of the seventh inning and finished with six strikeouts in his six innings of work.  Cubs starting pitcher, Matt Garza was very good, pitching seven innings, striking out five, giving up five hits.  In the eighth inning, Garza allowed a lead-off single to Jimmy Rollins (get use to hearing his name in this recap) before being pulled for Sean Marshall. Marshall would then allow a single to Michael Martinez before Chase Utley tied the game by doubling to left center. It was Matt Garza’s second straight start in which the bullpen couldn’t hold a lead for him.  In the 9th inning, Michael Martinez showed his clutch gene, by plating two runs on a bloop double to right with two outs.  Antonio Bastardo struck out the side in the bottom half of the inning to pick up the save.

In the blazing heat, the Phillies blitzed Ryan Dempster for six runs in the first three innings and cruised to a 9-1 win. Ryan Howard started the scoring when he beat the shift by poking an RBI single to left in the first inning. Shane Victorino’s RBI ground out scored their second run of the inning.  With two outs in the second inning,  the Phillies put together four straight hits, three being of the extra base variety which lead to an additional three  runs.  Even Brian Schneider got into the act when he doubled home Dom Brown in the third inning.  Cubs starter, Ryan Dempster was pinch-hit for in the bottom of the third and thus his day finished with six earned runs on seven hits, raising his ERA to 5. You’ll never guess who the Cubs brought in next…Ramon Ortiz…(Honestly, I had no idea he was still playing.) He softened the blow by only giving up two runs in his three innings of work.  Jimmy Rollins had two solo home runs in the game and was kind of enough to high-five several Phillies fans directly near the dugout. The only reason I bring that up is because Tom McCarthy’s laugh when he saw that will forever be stuck in my brain.  Vance Worley put on his big boy shoes, going eight innings, giving up just a run. In a game where the field temperature reached 110 degrees, Worley was all business and flat-out dominate. In the 7th, the Cubs loaded the bases with no outs. After allowing a run on a fielders’ choice, Vanimal got out the jam by throwing a double play ball and that led most of Cubs fans to the exits.

Michael Martinez is 6-17 with a home run and seven RBIs since this. Sorry Michael.

I wouldn’t dislike Carlos Beltran, but I’m not giving up a strong prospect for a rental.

Job well done by the Phils, things looked bleak on Tuesday, but then the offense finally stepped up.

Notes from the desk of Mike O

The Cubs lose another series, shocking one in which they originally were up 1-0 in.

Blame the lack of talent and ability from both the players and management.

Oh, and it wasn’t Steve Bartman’s fault either, or does that go back to the goat as well? 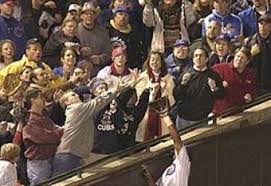 Sure looks like more than one person attempted to cost the Cubs the pennant……..

100+ years of misery……bad players, bad management and one angry goat.