Andrew Wiggins was selected first overall by the Cleveland Cavaliers.

END_OF_DOCUMENT_TOKEN_TO_BE_REPLACED 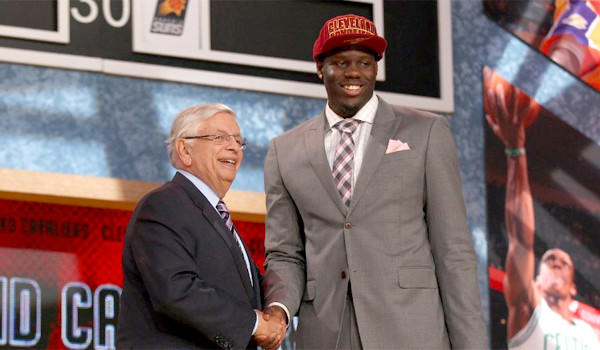 In somewhat of surprising move the Cleveland Cavaliers selected Anthony Bennett from UNLV.

END_OF_DOCUMENT_TOKEN_TO_BE_REPLACED

1. Boston Celtics – Return the same team that battled the Heat to seven games. They replace Ray Allen with Jason Terry as their spark off the bench.

END_OF_DOCUMENT_TOKEN_TO_BE_REPLACED

After losing to the Indiana Pacers in 5 games, the Orlando Magic decided it was time to clean house. The result was firing Head Coach Stan Van Gundy and General Manager Otis Smith. Van Gundy in five seasons in Orlando had a 259-135 record and was 31-28  in the playoffs. He won 3 Southeast Division titles and the 2009 Eastern Conference Championship. The Magic have had the fourth best winning percentage in the NBA under Van Gundy’s watch.

END_OF_DOCUMENT_TOKEN_TO_BE_REPLACED

The Sixers enter the second round for the first time since 2003 after knocking out the Rose less Bulls. Boston took out the Hawks in a tight six game series. Paul Pierce was a monster all series including a 36 point, 14 rebound effort in one of the wins. Andre Iguodala who is a hero in Philly after his series clinching free throws, is dealing with an Achilles injury that hopefully does not hamper him from a solid defensive effort against Pierce. Other than a dumb decision of bumping an official and getting a one game suspension, Rondo had a 17 point, 14 rebound, 12 assist triple double  and did a tremendous job running the Celtics offense all series. The Sixers must do a better job on the glass, as they were out rebounded most of the series by Chicago and it wont get any easier with Kevin Garnett and Brandon Bass. The match up the Sixers need to expose is Evan Turner against Avery Bradley, Turner has more size and a nice mid range game. Another thing that would be very beneficial to Philadelphia would be to run as much as possible and force the Celtics to get back. The experience and the rebounding of Boston will be too much for a young Sixer team who is playing with house money at this point.

Turner is one of the match-ups the Sixers need to take advantage of.

END_OF_DOCUMENT_TOKEN_TO_BE_REPLACED

The Magic finally got some good news Friday. Ryan Anderson was named the 2012 NBA’s Most Improved Player. Anderson averaged 16 points and 8 rebounds a game this season in Orlando. He also led the NBA in most three pointers made and three pointers attempted, only the second power forward to do that. Anderson is the fifth Magic player to win the honor and last since Hedo Turkoglu in 2008.

Anderson led the league in most three pointers attempted and made this season.

He is the fifth Magic player to win the award and first since Turkoglu in 2008.

Despite being without their start point guard for a portion of the year, the Bulls were able to grab the NBA’s number one seed. The Sixers have been up and down all year, but Doug Collins has done a decent job. The inside presence of Joakim Noah and Carlos Boozer could be too much for Elton Brand and the combination of Spencer Hawes and  Nikola Vucevic. The off-season addition of Richard Hamilton could pay big dividends, as his shots off screens could be an issue for the Sixers defense. The Andre Iguodala-Luol Deng match up will be fun to watch, as Deng has quite a bit of range and Iguodala is one of the best defenders in the league. Both teams have sharp shooters in Kyle Korver and Jodie Meeks off their bench, but Thaddeus Young could be the x-factor for the Sixers.

The Iguodala-Deng matchup will be fun to watch.

END_OF_DOCUMENT_TOKEN_TO_BE_REPLACED

3. Oklahoma City Thunder 34-11- Simply average since the All-Star break with a 6-4 record.